While he prays he is not correct, the author fears that … both the stock and bond markets will crash at the same time. Thereafter, as has happened in the past, FINRA will be inundated with crash-related claims. Case filings will ultimately break the old record of 8,945 set in 2003[1] in the wake of the “tech wreck.”

I debated whether to lead with a Yogi Berra quote, “It's like deja-vu, all over again,” but decided to go with Shakespeare’s quote above from The Tempest. Following recent capital market gyrations and volatility, the focus sooner or later turns to what these events mean for securities arbitration case filings. My short answer is: to predict the future, look to the past. Having served as FINRA’s Director of Arbitration from 1998-2013, and having seen this movie a few times before, I offer my thoughts on what recent market activity, especially the precipitous drops, means for FINRA’s arbitration filings.

FINRA’s arbitration case filings tend to run countercyclical to the capital markets. So it is not surprising that, with the markets enjoying a robust 2011-14, FINRA Dispute Resolution’s arbitration case filings plummeted to 3,822 cases – nearly 50% below the post-crash high of 7,137 cases filed in 2009. In fact, 2014’s filings would have been even lower, but for the surge in cases due to the Puerto Rico bond fund mess (more on that later). The chart below shows the number of arbitrations filed at FINRA each year, compared with the S&P 500’s close at the end of the year. The trend lines are unmistakable. When the markets perform well, arbitration filings decline. When there are prolonged, significant market declines, the case filings surge as surely as the swallows return to Capistrano. 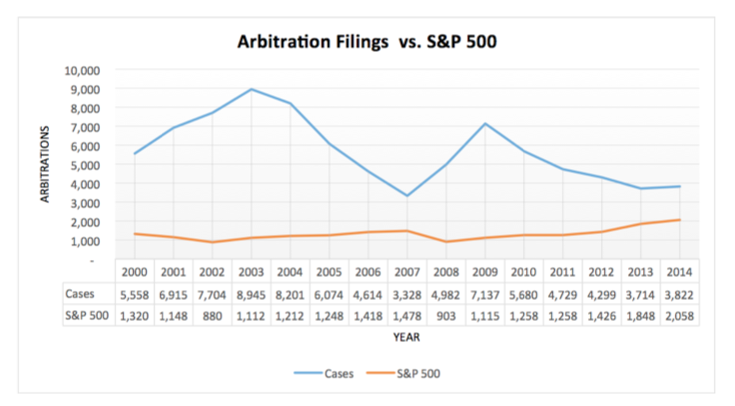 People don’t fight so much when times are good

Why is this the case? Simply put, people fight less when they are making money, and they fight more when they are losing money. And already, there are media reports of concerns about investor backlashes.[3] Three years following the 2000 tech wreck, FINRA arbitration case filings peaked at nearly 9,000. Then the markets recovered, and arbitration case filings plummeted through the beginning of 2008. Next, the Great Recession hit, the markets tanked and arbitration filings more than doubled. Finally, the recent bull market followed, and arbitrations dwindled from about 7,000 to almost half.

What does the past tell us? The significant and rapid decline in the markets in recent weeks will lead to arbitration filings going up significantly. If the past is any indication, look for arbitration filings to go up by 50-75%, perhaps more. Why do I say “perhaps more”? Besides general market conditions impacting arbitration filings, discrete product failures will augment filings. It has happened in the past (think: auction rate securities and subprime collateralized debt obligations), it’s happening now (Puerto Rico bond funds), and it will surely happen in the future (we just don’t know the product yet).

What kind of cases?

What issues will the next surge in arbitrations feature? Again, the past can be a guide (the parenthetical is a pithy summary of each side’s position):

Suitability: These customer claims tend to rise after significant market declines (“My investment strategy was preservation of capital; why did you have me in these risky, unsuitable investments?”). The firms tend to offer ratification defenses (“Odd that you got statements every month and never complained when you were making money”).

Execution – technical: Here, the customer complains about not being able to reach their broker by phone or online during rapid market declines (“I called and called trying to sell and could not get through. And your online trading platform was useless.”). Firms tend to say that the investor’s experience was not unusual given market conditions (“Our performance was not unusual given market conditions at that time”). Think of the technical glitches when Facebook went public in 2012.

Execution – general: These customer claims often involve stop-loss orders, with the customer complaining that their stock was sold at a much lower price than they anticipated. Suppose, for example, the investor has a stop-loss order for XYZ stock at $100. In a rapidly declining market, the trade finally ends up being executed at $90 a share. The investor contends that the broker cost them $10 a share (“What part about $100 was unclear?”). The broker’s defense is that the trade was executed in a timely manner given market conditions at the time (“XYZ’s price was dropping like a stone, and it was not that easy quickly matching buyers and sellers under those conditions. And, our performance was consistent with peers”).

Overconcentration: The cases tend to be associated with sector or individual stock declines. The customer doesn’t necessarily raise suitability issues but instead contends their account was overconcentrated (“I’m not saying bonds and bond funds were unsuitable investments given my conservative objectives, but why was I so concentrated in Puerto Rico bonds? Or, why was Grandpa so heavily invested in Lehman bonds?”). Again, the firms usually defend with a ratification defense.

Margin – investor claims: When the market drops precipitously and then quickly rebounds, margin customers may be sold out near the bottom, only to see the stock’s price come all the way back a short time later (“You [bad person]! You gave me a margin call when I was in the bathroom, and sold me out 10 minutes later.”) The firms will point out that they really didn’t have to give any notice and their actions were consistent with the account agreement (“We gave you 10 minutes when we really could have given no notice”). Arbitrators often look to past practice.

Margin – brokerage firm claims: When the markets suffer significant drops and don’t recover, customers may end up with debit balances. In other words, even taking into account the stocks sold off, the investor still has a negative margin balance (“So, after deducting the stocks we sold off to address your margin deficiency, you still have a debit balance of $25,000”). Customers don’t react well to this (“You [bad person]! You gave me a margin call when I was in the bathroom, and sold me out 10 minutes later. Go [engage in a physically impossible act]!”).

It’s worth noting that margin debt is on the rise. As reported in the SAC blog, “We took a look at the margin statistics FINRA posts monthly on its Website (ed: this is a great resource, albeit one that lags). Margin debt, we know from past SAA reports, have surpassed the half-trillion mark before (four mos. in 2014), but, by January 2015, debit balances in customers’ securities margin accounts had subsided to $485.9 billion. Then, the DJIA stood a bit below 18,000 and the market has progressed through the year, until the recent rupture, in a fairly narrow range. Given that horizontal pitch, we were somewhat surprised to see that margin debt has risen about 17% to $548 billion, as of the end of June 2015 (most recent figures).[4] $548 billion is the highest posting of margin debt we could find in FINRA’s records. We recall the heady days of the 2000 Tech-Crash, when we were exclaiming about a $300 billion margin debt total. In that case, there was a sustained crash and, in the aftermath and before the bounceback, the margin debt halved (Oct. ’01: $152B).”

Employment: If there’s a prolonged bear market, look for employment cases, especially promissory note cases, to increase. This happened after the bear market that started fall 2008, as firms contracted, merged, or simply went out of business.

This is not an exhaustive list. And of course I’ve been wrong before. As that great baseball philosopher Yogi Berra said, “It’s tough to make predictions, especially about the future.” We can compare notes in a year.

*George H. Friedman, an ADR consultant and Chairman of the Board of Directors of Arbitration Resolution Services, Inc., retired in 2013 as FINRA’s Executive Vice President and Director of Arbitration, a position he held from 1998. In his extensive career, he previously held a variety of positions of responsibility at the American Arbitration Association, most recently as Senior Vice President from 1994 to 1998. He is an Adjunct Professor of Law at Fordham Law School. Mr. Friedman serves on the Board of Editors of the Securities Arbitration Commentator. He is also a member of the AAA’s national roster of arbitrators. He holds a B.A. from Queens College, a J.D. from Rutgers Law School, and is a Certified Regulatory and Compliance Professional (Wharton-FINRA Institute).