Skip to content
Baseball Season is Here! You Can’t Tell the Anti-Arbitration Bills Without a Scorecard

Baseball Season is Here! You Can’t Tell the Anti-Arbitration Bills Without a Scorecard

In SAA 2017-10, we reported that Congressional Democrats announced March 7 the reintroduction of six bills aimed at curtailing mandatory arbitration in consumer or employment contracts. In the ensuing weeks, there have been changes, so we decided to ask resident futurist, Fordham Law prof, and SAC Contributing Legal Editor and Board Member George H. Friedman to provide an update. The words that follow are Professor Friedman’s.

I’m baaack! Below is an update of my previous guest analysis. The ten bills – all anti-arbitration and all introduced by Democrats in the new Congress – are organized a bit differently, and this new analysis comes with a handy chart. Some bills are reintroductions, but a few are new. Some amend the FAA, some specific statutes, and some both. To one extent or another, the bills aim to protect consumers – including investors – employees, civil rights claimants, servicemembers, and/or whistleblowers, from perceived unfair processes. Some bills ban predispute arbitration agreements, while some create procedural safeguards. Finally, some are prospective but a few are retroactive. 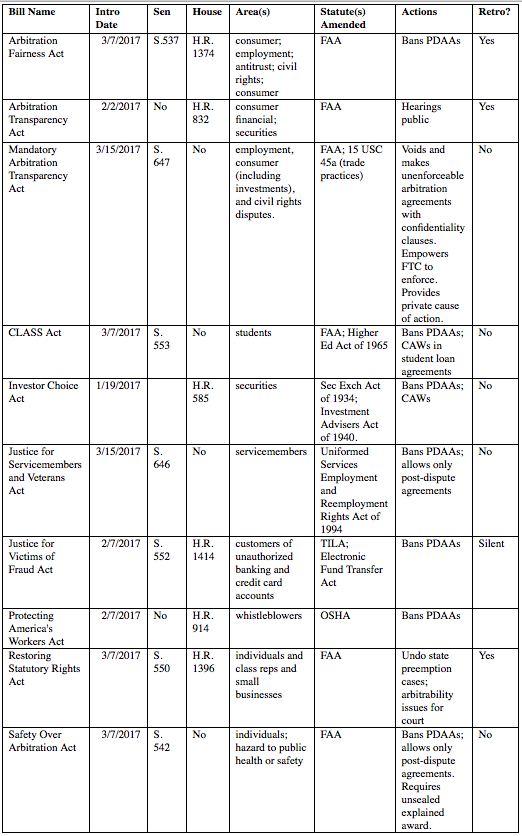 Of Most Interest to Securities Arbitration Parties

Arbitration Fairness Act (H.R. 1374): Our old friend, has been introduced going back years. This version of the AFA is identical to the last version, and would amend the FAA to ban mandatory arbitration of employment, consumer (including securities), antitrust, or civil rights disputes. It would be retroactive, applying to claims made after the effective date. Reintroduced March 7. House text here.

Investor Choice Act (H.R. 585): Would amend the Securities Exchange Act of 1934 and the Investment Advisers Act of 1940 to ban the use of mandatory PDAAs by broker-dealers and investment advisers, let customers select the arbitration forum, and would guarantee class action participation. It would not be retroactive. Reintroduced on January 19th. House text here.

Arbitration Transparency Act (H.R. 832): Would amend the FAA to require that arbitration proceedings in certain disputes involving consumer financial products and services be open to the public. It would be retroactive, applying to hearings taking place on or after the effective date. This is a new bill introduced February 2nd. House text here.

Mandatory Arbitration Transparency Act (S. 647): Is different than the House version. Would amend the FAA to make unenforceable arbitration agreements with confidentiality clauses for employment, consumer (including investments), and civil rights disputes. Exception if confidentiality interest significantly outweighs disclosure, and for collective bargaining agreements. Empowers Federal Trade Commission to enforce as an unfair or deceptive trade practice. Allows a private cause of action for violations. This is a new bill introduced March 15th. Text here.

Protecting America’s Workers Act (H.R. 914): Amends OSHA to protect whistleblowers: “Procedural Rights -- The rights and remedies provided for in this subsection may not be waived by any agreement, policy, form, or condition of employment, including by any pre-dispute arbitration agreement or collective bargaining agreement.” This is a new bill introduced February 7th. House text here.

I continue to think there’s virtually no chance any of the bills aimed at broadly amending the FAA will be passed by this Congress or signed by President Trump. As I wrote previously, the lone bill I think has a chance is the Justice for Servicemembers Act, not only because it is narrowly focused (again, it would amend the Uniformed Services Employment and Reemployment Rights Act of 1994, not the FAA), but also because the last bill actually garnered Republican support – unlike any of the other bills introduced in the last Congress. I think a bill perceived as protecting servicemembers will have bipartisan appeal and President Trump clearly supports the military. Thus, this bill might have a chance at becoming law. I say, “perceived as” immediately above, because I don’t agree with the premise that arbitration is an inferior form of justice. After all, SCOTUS requires that claimants in arbitration be able to effectively vindicate their statutory rights. By the way, why can’t there be a single omnibus bill instead of ten? Just asking….